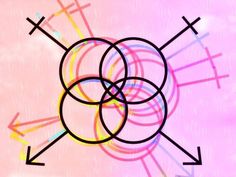 Erm, fluidity that is. I love the word fluidity, because with fluidity comes another f word: freedom.

One of the most eye opening personal experiences for me by far has been the realization that I was not exactly the heterosexual being the world had attempted to shape me to be. I don’t say that in contempt, but in a way to highlight the privilege of being heterosexual in Western society.

Or, shall I say “privilege”. Let me explain.

I first saw the word Bisexual in my Human Sexuality text book. I distinctly remember thinking “how cool is that? People can love regardless of gender?” I had made out with many women at that point, but never thought that I would fall for one. At that point I demonstrated bisexual behaviour but not identity.

Fast forward to the time I started having feelings for a female friend, and that word that jumped off the page just a year earlier was very relevant and important to me. I was really excited

But not everyone was.

I had a couple of pretty negative experiences from the beginning that really slowed me down in my coming out process. They included a lot of me explaining what had “happened” or legitimizing what I was saying. I had been “boy crazy” for so long… how could that change? Trying to date lesbian women was damn near impossible once I mentioned the “b word” or I hadn’t dated a woman to date. I stopped feeling as excited.

I shut down for a couple of weeks to think about how to approach this new reality. I had no shame initially when I came to terms with this, but after putting it out to the world with unfavourable reactions from two people I did not feel safe to be myself. Then I remembered a time this had happened before: I had felt this way I had been diagnosed with depression. In both instances, I knew that I was the same person, but I was looking at life through a slightly different coloured lens. The first few people were shocked because it was not what they had expected of me. What I realized is that when I started speaking my truth and told more people about my depression (i.e., in a way, coming out depressed) was when I was able to form relationships with people who cared about me no matter how I was doing mentally, and found community and support. So I took that lesson, and applied it here with my newfound sexual identity.

Since my retreat I have: come out to all my close friends and family (and continue to do so with almost every new person I meet), dated a few women, been president of the university’s Pride Society, have walked in the HRM Pride Parade for the past seven years, wrote a thesis on Bisexual* Coming Out Experiences, participated in talks and panels around queer identity, ran a Queer workshop with the Halifax Trade School, annnnnd now I’m here on a Podcast and Blog, openly outing myself all over the internet. Needless so say, I’ve queered up my life.

I like to use what I have learned in both my personal experience and my research to normalize things for other people who feel like they just can’t put their thumb on “what” they are. Gay, lesbian, bi, pan, queer, ace, homoflexible, non-binary, trans, fluid, straightish, ambisextrous, etc. There may be a period in your life that you realize you may not be as hetero, or as cisgendered, or monogamous as the world attempted to shape you to be, and you may want someone to tell you what that means.

I am here to tell you: no one can tell you.

Sexuality and gender, and monogomishness, can be in flux, and are extremely individual. It’s not always clear cut, with clusters of particular signs and symptoms that can place you in a definitive category.

In other words, we can outgrow the box we put ourselves into. We are always changing in so many ways, including with our sexual and romantic interests.

Ones sexual/romantic/gender identity are also mutually exclusive from one another. So just because someone identifies as bisexual, does not mean they are also polyamorous (with multiple romantic and/or sexual partners), but it also does not mean that they aren’t. I did this really cool exercise at a Queer workshop where I had people place themselves on four separate scales as to how they were currently feeling. This got us looking at all of the areas of grey between the black and white.

The scales we used in the exercise were:

What this exercise was meant to do was demonstrate individuality, messiness, the grey areas, and fluidity. These are all be separate aspects of identify. They can also be fluid, meaning that each can shift and change over one’s life independently of the others. I made sure to use sticky tack for the markers so that I could also demonstrate the potential impermanence of these placements. So I demonstrated how I would have likely identified ten years ago, as opposed to how I do now.

So how do we know where we fall on an arbitrary “scale”? I recognize for some people this is important. It was for me in the beginning. My answer in three words would be exploration, exposure, and play.

How can we know what we are into until we have either the safety to experience, and the opportunity to try something new? In my case, I did not even know bisexuality was a thing until I read it in a textbook. It was also not relevant to my identity until I had the pleasure of meeting a particular lady that got my mojo going.

I’ll also add, just to make it even more confusing, that just because someone does something that is outside the “normative” expectations of how they might identify, does not mean that their identity necessarily has to change. For example, if Jeremie, who identifies as a heterosexual male, dabbles in some passionate make out sessions with a guy at a party, and likes it, does not necessarily mean he is any less heterosexual. That is unless he thinks so. This is a sexual exploration, a behaviour, and not all behaviour translates into an identity label (although I daresay from our conversation, we could say at the very least that he is straight but not narrow 😉 )

Having a label can also be the most liberating thing for someone. So if they want to have one, let em. If it changes, let it!

We put a lot of pressure on ourselves and receive a lot of pressure from others to act/appear/disclose in certain ways. Life is complex, identities are messy, and we are experiencing and learning new things all the time. This looks different for everyone – and that’s okay! At the end of the day supporting the people we know and care about is honestly the best thing we can do, despite how they identify or live their romantic and sexual lives. When I started more widely disclosing my sexual identity, I found that most people were not at all phased, and that was the best support I could have asked for. When I have open and honest conversations with people who want to know if what they’re into is “normal” I just listen. I talk it out with them. I don’t try to sway them one way or another. I’d never ask someone to figure it out. This is their life to explore and play with. They might even figure it out just to have it change again.

So when I mentioned heterosexual privilege at the beginning, I want to highlight that there can also be disadvantage if the constraints of the label limit you from doing what you want, or in this case, who you want.

So fuck it. Just fuck in safe, consensual ways that make you feel good, or in ways that you’re curious about. We won’t know until we try, and trying something doesn’t mean anything major until you think it does.

Enjoy going with the flow ❤